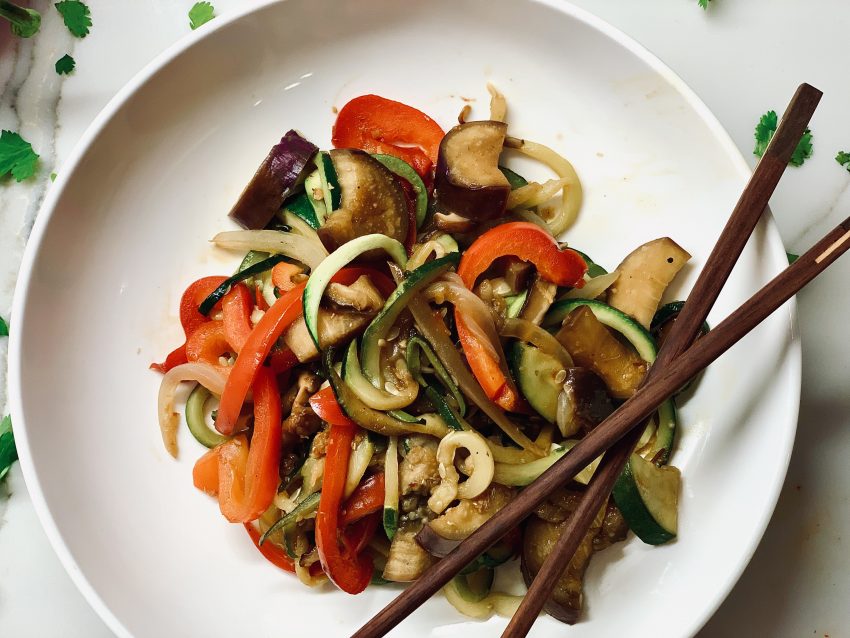 This is a refreshing twist on veggie chow mein, and gluten free if using the right (safe!) ingredients. Zucchini noodles add extra vegetables, replacing traditional noodles, without sacrificing any flavor or texture.

The refreshing bit of this recipe are the zucchini noodles. Zucchini noodles take significantly less time and effort than you think. You can certainly buy store bought zucchini, but they wont taste as good or have the same crispness as home made (especially if they’re frozen- don’t buy frozen zucchini noodles, they will be mush!). I absolutely love the Kitchenaid attachment: its simple to use and easy to clean up.

Start by sweating the eggplant. Quarter and slice the eggplant, and lay out on a paper towel. Sprinkle eggplant slices with salt on both sides and let sit for 15 minutes. While the eggplant is sweating, prepare your vegetables and spiralize the zucchini to make the noodles. In a small bowl, combine soy sauce, oyster sauce, fish sauce, chili garlic sauce, rice vinegar and sesame oil. Make sure that you are using gluten-free varieties of soy sauce and fish sauce if you have an allergy. Be careful with sesame seed oil if you have a nut allergy, while not a nut, the proteins are similar enough that some people have experienced a reaction. After 15 minutes, wipe the excess salt from the eggplant and begin to prepare your chow mein.

Start by preparing your noodles; warm 1/2 teaspoon of oil in a large frying pan or wok. Stir fry the zucchini noodles for 2 minutes and set aside. Warm 2 tablespoons of oil in the wok over high heat. Add the onion and bell pepper and stir fry until tender, about 2 minutes. Add the mushrooms and eggplant and stir fry until golden brown and slightly tender, another 2 minutes. Remove from heat and the cooked vegetable to the bowl with the zucchini noodles. Return the pan to high and warm another 1/2 teaspoon of oil. Stir in the ginger and garlic and cook, stirring constantly, until fragrant, about 10 seconds. Return the veggies and zucchini noodles to the wok, and add the prepared sauce. Stir to combine all ingredients and cook until heated through, about 1-2 minutes. Garnish with cilantro and serve warm.

No votes so far! Be the first to rate this post. 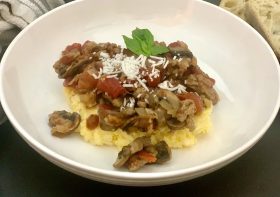 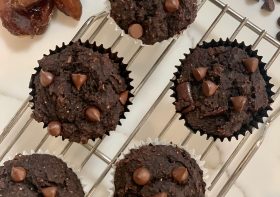 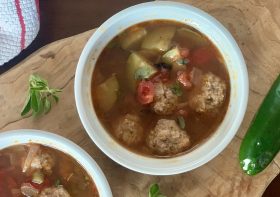 Don't Forget to Follow Us for the Latest Posts and Recipes: